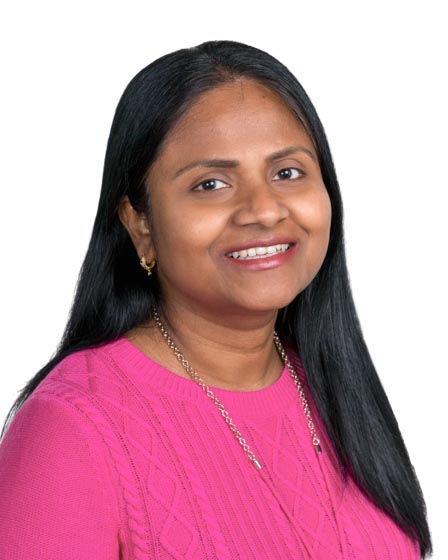 My mission is to treat my patients with compassion and deliver to them the best service available.

Dr. Rajasingham obtained her medical degree from the University of Jaffna, Sri Lanka in 1999. She worked in her hometown as an anesthesiologist. After moving to the United States in 2003 she passed the USMLE exam. Dr. Rajasingham interned at Richmond University Medical Center and Staten Island New York.

In 2012, she completed her neurology residency at UMDNJ - Rutgers New Jersey Medical School. Dr. Jamuna concluded her training at The University of Connecticut Health Center where she completed a one year fellowship in neuromuscular disorders and electro diagnostic studies (EMG). For a year, she worked as a neurologist at Hackensack University Medical Center and at the same time she was affiliated with Holy Name Hospital.

In 2014, Dr. Rajasingham joined Bergen Neurology Consultants and maintains privileges at Englewood Hospital Medical Center. Her particular interests are in neuromuscular disorders including ALS, Myasthenia Gravis and Migraine. She has published several peer-reviewed research articles and posters in the Journal of American Academy of Neurology. She has won an award for a poster at the Muscular Dystrophy Association Meeting.